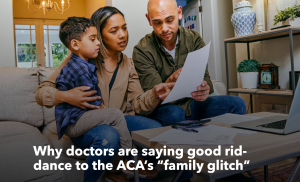 The AMA has long called for eliminating the “family glitch” in the Affordable Care Act (ACA). It’s just one step to improving the ACA for patients.

What’s the news: President Joe Biden has directed the Treasury Department and the IRS to finally put an end to the much-maligned “family glitch.” The glitch has prevented hundreds of thousands of families from getting financial assistance to buy ACA marketplace coverage because affordable employer coverage was offered to the worker but not to the worker’s family.

The White House estimated the move—intended to take effect in January in time for the next health insurance plan year—“would save hundreds of thousands of families hundreds of dollars a month.”

The AMA has long sought the change and touted it as part of its broader plan to cover the uninsured (PDF).

“The family glitch is inconsistent with the goals of the Affordable Care Act and unfairly penalizes family members of lower-income workers,” said AMA President Gerald E. Harmon, MD. “The American Medical Association has repeatedly asked Congress and administrations to fix the glitch, and the Biden administration has made good on its promise to make health care coverage more affordable.”

Now, “in determining eligibility for premium tax credits, coverage for family members of an employee is considered to be affordable as long as employee-only coverage is affordable,” Dr. Madara explained, noting that the glitch “leaves many families of workers ineligible to receive premium and cost-sharing subsidies to purchase coverage on health insurance exchanges, even though in reality they would likely have to pay well over 9.83% of their income for family coverage.”

In 2020, the estimated average employee contribution for self-only coverage was $1,243, Dr. Madara’s letter notes. By contrast, the estimated average contribution for family coverage was $5,588. More than half of the 5.1 million people affected by the family glitch are children who don’t quality for the Children’s Health Insurance Program, Dr. Madara’s letter notes.

Learn more: Read this Leadership Viewpoints column by AMA Immediate Past President Susan R. Bailey, MD, for more on why it’s time to nix the family glitch and make these other ACA fixes.

Fixing the ACA’s family glitch is a significant development to strengthen the ACA, but more needs to be done. The AMA has also called for extending the ACA improvements included in the American Rescue Plan that have made coverage much more affordable in the ACA marketplaces, and expanded the eligibility for subsidies to purchase marketplace coverage to more people. If Congress does not extend these provisions, they will expire at the end of this year.

The ACA’s Family Glitch is a problem with Obamacare’s coverage requirements that affect many low-income Americans. The program requires that insurance be affordable for both workers and non-workers, but it also provides federal help with premium costs. The family glitch deals with the people caught in between. It is unclear whether this regulatory fix will help these people, or worsen their situation.

The proposal to close the loophole on the family glitch is an important one. By fixing the glitch, many people will be able to afford their ACA plans. By closing this loophole, most people would pay less for their coverage than they would if they were covered through their employer’s plan. While this may sound like a small thing, it could have a huge effect on the cost of health coverage for millions of Americans.

The Affordable Care Act or ACA’s family glitch prevents millions of Americans from qualifying for subsidized coverage. Children under the age of 18 falls into this category, which means they are above the Medicaid eligibility threshold but not high enough to qualify for marketplace subsidies. The same goes for children who are on the government’s Children’s Health Insurance Program. In other words, these families are unable to purchase coverage because their employer requires them to spend more than nine percent of their income on premiums.

According to the Kaiser Family Foundation, 5.1 million people fall into the family glitch, and while most of these individuals are under 18 and currently enrolled in employer-sponsored health insurance, these individuals would still be spending more than they are now on health insurance premiums. If they could qualify for subsidized coverage in the Marketplace, those families could save a considerable amount of money on their premiums.

A Biden administration proposal would fix a long-standing ACA family glitch, which has left some people without health coverage. The glitch prevents an estimated five million Americans from receiving important cost-assistance assistance. The proposal, issued by the Treasury Department and Internal Revenue Service, creates a new minimum value for coverage for certain family members of eligible employees. While this solution sounds great, the cost of a fix would likely be far higher than the current system.

If the Affordable Care Act had been implemented with a universal, single-payer system, the cost of a fix for the family glitch would have risen dramatically. Instead, the ACA has been designed so that affordability is determined for the entire household. Once one person’s premium goes below a certain threshold, the entire household is ineligible for subsidies. However, fixing the ACA family glitch won’t help everyone. Many employers subsidize employee premiums and pay a large portion of dependent premiums. However, some employers require substantial employee contributions.

The ACA’s family coverage glitch affects about 5 million Americans. Most of them are covered through their employer but the cost of this coverage is higher than the 9.61 percent mandated by Congress. Others have opted to purchase individual health coverage without subsidies or ACA standards. A recent study by Kaiser Family Foundation (KFF) estimates that this glitch has left about 9 percent of Americans uninsured. In addition, despite the family coverage glitch, the average cost of insurance for individuals in the individual market may be lower than it would be under the standard ACA.

The Affordable Care Act made insurance coverage more affordable and accessible, but millions of people are still uninsured and underinsured. Despite the Affordable Care Act’s promise to make coverage more affordable, nearly 30 million Americans still do not have the coverage they need. Premiums and out-of-pocket costs are weighing heavily on the lives of these people. Vice President Biden campaigned on the affordability of coverage and pledged to eliminate the “firewall” between employer coverage and the Marketplaces. By fixing the family glitch, millions of people can find affordable coverage.

Fortunately, there is a policy fix for the ACA family glitch that would extend subsidy eligibility to nearly all of the 5.1 million people who will have to pay for their own insurance. This change would have the added benefit of promoting the enrollment of younger and healthier people, which will reduce premiums for all enrollees. The cost of fixing the glitch depends on how many people take advantage of the policy fix, however.

This ACA family glitch has caused a variety of problems for American families. One of the biggest problems is the fact that most employer-based insurance plans are designed to cover only the employee and not their spouse or children. The current interpretation of the ACA looks only at the employee’s individual coverage, which has left thousands of families without insurance. The other problem is that if one employee enrolls in a workplace plan, the spouse or other dependent has to buy coverage from the marketplace. This causes many families to have to pay two separate premiums, meet two separate deductibles, and navigate two provider networks.